Our Savior Lutheran Church and School began when several Lutheran families in Lansing decided to begin a new Christian day school, and for that reason formed a new congregation. The commitment to Christian Education in our congregation goes back to its very conception.  The first worship service was held on Sunday, September 9, 1956 in the old Everett High School gymnasium with 225 in attendance. The newly formed congregation’s goals were to share the Gospel of the Lord Jesus with their community, to support Christian education for their children, and to offer faithful service to the Lord. Pastor Eldor Bickel was installed on January 20, 1957, and later that spring Mr. Arthur Wolter was called as principle of the school. Pastor Bickel faithfully served the congregation as senior pastor until June, 1990, and until 2013 as pastor emeritus. 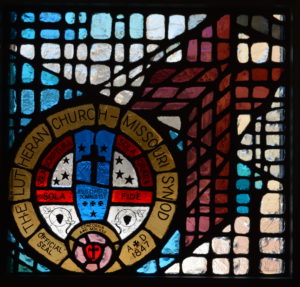 A four room school building with an auditorium was constructed in the summer of 1957, and Our Savior Lutheran School opened its doors in September with 98 students enrolled. Worship services were held in the school auditorium until the first sanctuary was dedicated on December 8, 1968. In 1971, the first series of stained glass windows were installed in the church. The series was completed in 1992. All of the stained glass were removed from the old sanctuary and incorporated into the new church in 2008. The Schlicker organ, first installed in 1981, was also brought to the new church. When Our Savior began helping Hmong families from Laos start new lives in Lansing in 1978, a new ministry was formed that continues to this day, led by Pastor Lang Yang.
By the grace of God, in the 1980’s, the membership of the congregation was nearing 1,000 members, and the school began rapidly expanding. Additional classrooms were added in 1980, 1982, 1985, and 1998. In 1989, Rev. David Maier was installed as senior pastor at Our Savior. Pastor Maier brought a continued bold vision for the congregation along with faithful pastoral care until he was elected to serve as the president of the LCMS Michigan District in June, 2009. Associate pastors who served Our Savior include Rev. Ronald Jobe (1974-1979), Rev. Richard Lieske (1991-1994), Rev. Robert Appold (1995-2005), and Rev. Roy Olsen (2005-2012).

In September, 2002, the congregation made a bold decision to be able to serve more families with the Gospel by relocating to a growing and expanding neighborhood. The search was blessed with 29 acres of land at the corner of E. St. Joe Highway and Broadbent, and construction of a new church and school commenced in November 2007. The school portion of the building was completed just in time for the new academic year in September, 2008. Worship services were held in the gym until the sanctuary was completed and dedicated on November 2, 2008. Rev. Ken Klaus, who preached at the dedication service, challenged the congregation to use these new facilities to be bold in their outreach to the community and to the world with the message of salvation through Jesus, our Savior.

On November 10, 2013, our current senior pastor, Rev. Bill Wangelin, was installed at Our Savior. Now established on the west side of Lansing, the church and school have built strong connections with Delta Township and Grand Ledge communities, even as they serve families from the greater Lansing area. With the mission to Learn, Live, and Share Christ, the members at Our Savior Lutheran Church and School continues to lift high the cross and point people to our Savior Jesus!